Don’t mistake this for another one of those Favorite Whatever exercises. There’s no room for such fluffy diversions on Negative Space! Instead, let’s get right down to the heart and soul of it: What, I ask you, are your cinematic erogenous zones?

In order to adequately answer this seemingly abstract question, I challenge you all to name five specific words that bind the movies that move you. Not the most influential ones, not the culturally correct examples, but the movies you keep coming back to, however flawed they may be. The kind of movies that remind you (and you alone) of why you love the medium in the first place.

A film that cannot be described by these five words might still be good – an indisputable classic even – but it wouldn’t shake you to the core. The question is: what does? What tickles your fancy? What makes your movie-loving heart throb? Now’s the time to show the world where you’re really coming from…

To give an indication of what I’m getting at, here are my Five Words, in no particular order:

Sure, that looks easy enough, doesn’t it? Just wait until you start your own list! 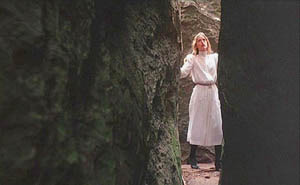 Your turn now. Mind you: Just five words. Not six, not fifty. I won’t be flexible about this! Avoid easy ways out (scratch VISUAL–every movie is visual!) or open doors (fundamental dramatic ingredients like CONFLICT). Give me something personal and precise that offers a good taste of your sensibilities, however unfashionable or bizarre. I assure you that, if you decide to have a go at it, the Five Words Challenge will make your next video rental choice a lot easier!