A few years ago, SBS Broadcasting asked us to produce a commercial for their shopping channel / webstore Via5. We came up with a script in which a man uses a remote control and a laptop to get himself everything he needs, simply by clicking a button. The client liked the script, but didn’t have much of a budget to offer. You might say we were faced with a challenge… Video production companies like corporate video production services in Dubai get a lot of challenging tasks. It helps to come up with unconventional ideas.

There’s an old-school movie trick to make an object suddenly appear or disappear within the frame. You simply hold the camera still while you shoot the same shot twice; one time with the object in question and one time without it. Place a dissolve between the two shots, et voilÃ : magic! Right? Well, not exactly… Awe ages. Such a vintage effect may have had people panting in their seats in the 1920’s–you’ll need a little more to wow audiences today.

Ever since motion control photography has been invented (the technique to program cameras in order to replicate the exact same movement for an unlimited number of times, even at different scales), filmmakers can make their objects appear or disappear while having the camera pan by, zoom in or tilt up at the same time. Obviously, such a state-of-the-art effect was what I wanted for this commercial. Unfortunately, we didn’t have motion control money.

Then I got an idea… When I’m doing motion graphics, I often use documents with a resolution considerably larger than that of a TV screen, in order to be able to digitally zoom in or pan over the image with compositing software. If I could find a way to expand my recorded canvas, I’d be able to make a virtual camera move in post-production.

Too bad we couldn’t afford recording on High-Def or shooting VistaVision plates, either. (In fact, we ended up using one of the first DV-cameras that could handle progressive scan.) How could I achieve more or less the same thing without going wildly over budget?

The answer: by stitching. 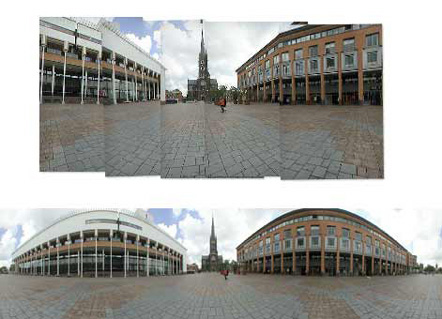 Everyone who’s ever shot a panorama photo with a digital camera knows what I’m talking about: You take a picture, then you turn the camera a bit while keeping the horizon in place, you take another, and so on and so on, until you’ve covered the whole landscape. Once the pictures are in the computer, you use stitching software to blend them together, resulting in a wonderful overview of the scenery.

For this commercial, we did more or less the same thing. After shooting each static set-up twice – one time with and one time without the appearing object – we would rotate the camera on its tripod and shoot to the left side and to the right side of the original frame. This way I was able to stitch three shots together (with the actual action taking place in the middle shot) and add a digital pan in post-production. To allow myself the same freedom for vertical “camera moves,” we shot full-frame and added black bars to disguise a few digital tilts.