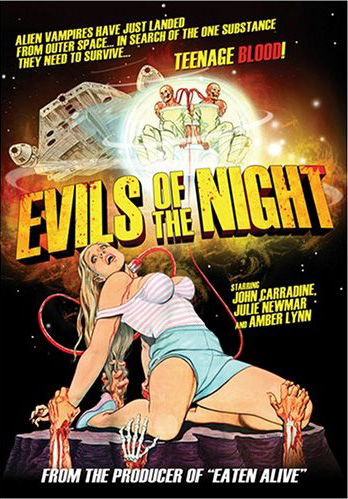 You need to love this, don’t you?
The hard evidence, courtesy of DVD Talk:

Take a good look at the DVD cover art for Evils of the Night (which is taken from the film’s original poster) and you see the definition of an exploitation film. We see a buxom blonde whose blood is being drained from her body by tubes as skeletal hands reach for her and a quartet of skeleton-head aliens look on (as the cousin of the Millennium Falcon flies past). Of those things, only the buxom blonde appears in the film. Don’t be fooled by the trashy goodness that this movie promises. This movie gives bad movies a bad name. (…)

The “aliens” are simply actors in silver outfits, with the females wearing crazy shoes. The “spaceship” is just a disco light ball being lowered through the trees. (…)

The bulk of the movie takes place at night (hence the title) and for the most part, it’s nearly impossible to tell what’s going on. (…)

Most films of this ilk typically fall into the “so bad they’re good” realm where one can perform a Mystery Science Theater 3000-like commentary to the movie. Evils of the Night is so pointless, boring, and difficult to see that its ponderous nature will scare off even the hardest fan of trash cinema.