When I read Frank Miller’s 300 a few years ago, I very much doubted if this graphic novel could ever be successfully adapted to film. Not because the story was too vast and complex to survive the translation, in a way Neil Gaiman’s intricate Sandman saga is; or too outrageously blasphemous like Preacher by Garth Ennis and Steve Dillon. No, simply because of Miller’s virtuoso use of extreme comic stylization within a historical framework. 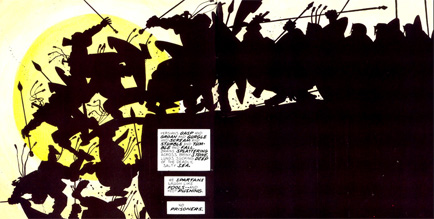 Nevermind that we’re talking about the ancient battle of Thermopylae, in which King Leonidas and his personal guard of 300 Spartans held off an army of one million (give or take) Persian warriors in a narrow gorge. Faithful reconstruction my ass! This is Frank Miller’s tall, mythical take on the historical event, existing in a universe all of its own. The swollen hyperboles, the ferocious violence, the supreme machismo and glorious heroism–it all worked to great effect on the page. Any attempt to approach this material in a less stylized manner, I figured back then, would make it seem utterly ridiculous.

That was before Robert Rodriguez pushed the envelope of comic book faithfulness with his film version of Sin City (2005). Doubt turned into hope: Here was a movie that dared to stray from the medium’s inherent photorealism with expressive lighting, a digitally controlled color palette and (most importantly) all-CGI-backgrounds. The method proved so flexible that it even allowed the makers to match each shot of the film to every drawn panel in the comic. From the moment it was announced, I realized it was a wise move to follow a similar route for 300 (2007). And judging from his surprisingly solid remake of Dawn of the Dead (2004), Zack Snyder is just the man to pull it off.

Last month my hopes were rewarded by an awe-inspiring teaser trailer. Apart from the stunning imagery (watch this comic-to-screen-comparison to get a sense of how much Snyder sticks to Miller’s vision), this trailer excels at what the comic medium is incapable of showing: actual movement. Anything is possible now… Hear my inner geek roar!