The far future. Humanity faces the dawn of an intergalactic war as Earth is invaded by a giant fleet of evil mutants. A Time Lord from the planet Gallifrey plans a pulse of energy that will decimate the invaders, but may kill off the human race along with it. His trusted companion, possibly the only person who could put an end to the unfolding cosmic tragedy, is stranded oceans of time away. Twenty minutes to Armageddon… and the fucking screen goes to black.

I have a problem. A big one. Last weekend, the last episode of the new Doctor Who series (starring Christopher Eccleston as the 9th Doctor) was aired on Dutch television. I made sure to program my DVD-recorder in order not to miss it, and now it turns out that only half of the episode has been recorded. Apparently, the hard drive was full! My eight-year-old son Rasmus, who’s become a die-hard Whovian over the course of a single season, is not amused. I don’t blame him–I nearly can’t get over it myself.

I’ve never been a Trekkie, I’ve just about lost all interest in that famous galaxy far, far away, but there’s no way I can resist the Whoniverse! Doctor Who is swiftly becoming a new obsession of mine. It’s gotten to the point that I ordered a pack of Doctor Who Top Trump cards over the Internet, along with two fully illustrated guides documenting every foe, robot, alien and monster the Doctor has ever encountered. How did it come to this?

As a young kid, the classic BBC series with Tom Baker freaked me out. The electronic theme music was enough to chill me to the bone (I still think it outdoes Mission: Impossible in terms of contagiousness), let alone the eerie planetary landscapes and baddies made out of egg cartons. Back then, I was unaware of the Doctor’s rich history in television and I soon lost track of the British sci-fi phenomenon altogether (mind you, we’re talking about the longest running sci-fi series ever, with 23 seasons shown from 1963 all the way through to 2006). But the new series, produced by Russel T Davies, has finally shown me the Righteous Path… 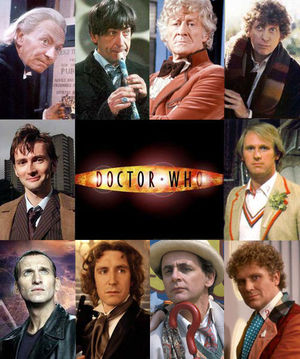 So what hooked me? In spite of some pretty cool creature designs and CGI-effects, the production value of the new Doctor Who is still nothing to write home about, and the quality of the individual episodes is far from consistent. What really got me excited, though, is the the unexpected depths of its profound silliness, the amazing flexibility of the Doctor’s quirky universe and the speculative audacity of his mind-bending escapades. This series, much like its protagonist, doesn’t avoid uncharted territories. It embraces change and finds shades of grey in the most black-and-white of concepts. 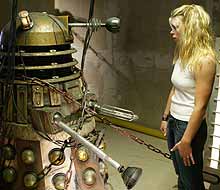 Take the Doctor’s most notorious nemesis: the Dalek. Simply put, the Daleks are the most ruthless race in all creation. Indeed, you can’t get any more black-and-white than that, but here it comes: While they appear to be armoured robots, their casing is in fact the survival chamber for a hideously mutated alien life form. Mutated how? By one thousand years of exposure to chemical and biological warfare, for starters… Followed by a little tweaking courtesy of the crippled alien scientist Davros, who morphed what was left of his species into lethal creatures in travel machines, devoid of any emotion save hate–without pity, compassion or remorse. The implanted Dalek survival tactic is simple yet effective: Exterminate all life forms other than your own.

Watching the episode Dalek, I started out chuckling over the title character’s ridiculously impractical pepper pot design, before being completely caught up in the suspense of the story. By the end, the poor lonely creature trapped inside its tank-like mechanical cage, lost in its own destructive thinking pattern, had almost driven me to tears. Quite a feat! This is the kind of nuanced imaginative fiction that you’d love to see handled on a Hollywood budget, but seldom will. 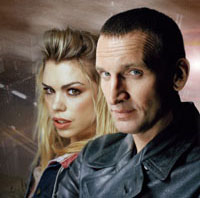 For an impression of the first new series, check out the YouTube clip below. (In the UK, David Tennant as the 10th Doctor has already picked up where Eccleston left off.) To see two ultraviolent reenactments by my two boys and me, click here and here. I know: I’m beyond redemption…