Miike’s bizarre fantasy film The Great Yokai War (2005) opened in selected US cinemas this week. For those who missed my first impressions back in February, here’s a chance to read them again:

I just came back from seeing Takashi Miikeâ€™s new film The Great Yokai War at the Rotterdam Film Festival. I knew nothing about this movie going in, and boy was I in for a treat! It turned out to be something akin to Japanâ€™s answer to the Harry Potter or Narnia series. You know: Miike, for kids!

Apparently, for the first time in his career, Miike was handed a big-ass budget and the cult-favorite made sure it showed. This film is massive in scale yet remarkably off-beat and full of the perversities and black humor Miike is known for. For a supposed family film, itâ€™s way too “out-there” for Western taste (mine anyway: I wouldnâ€™t let my oldest son see it until heâ€™s, like, ten or eleven), but it will blow your mind. In fact, The Chronicles of Narnia is the undercooked egg The Great Yokai War swallows whole for breakfast!

You wonâ€™t hear me declare it a masterpiece. To tell the truth, I donâ€™t know what the hell it is. Something Iâ€™ve never seen before, thatâ€™s for sure. Miikeâ€™s cinema is just too plain weird to satisfy on any conventional level. This guy re-invented the word â€œsubversive.â€ Kiddie movie or not: Yokai War goes from gory body-horror to intimate drama, from absurd parody to epic grand guignol fantasy, from kinky science fiction to all-out slapstick. It features legions of Asian folktale goblins, the coolest robots Iâ€™ve ever seen in a motion picture and two very sensual female characters, young enough to make me uncomfortable to be aroused by. Just picture Miike behind the computer screen, trashing proven Hollywood impulses and pushing his CGI-artists in every direction he can think of. (If you’ve seen Audition and Gozu, that should mean something.)

Think Miyazaki, but live-action, with a slightly fetishistic sensibility. Just a few references that popped in my mind while looking at the film: Spirited Away, Howl’s Moving Castle, The Wizard of Oz, Nightbreed, Blade Runner, Akira, The Neverending Story, Metropolis, Labyrinth, Godzilla, The Terminator, Kung Fu Hustle, Lord of the Rings–all filtered through the prism of the mad filmic genius of our lifetime. 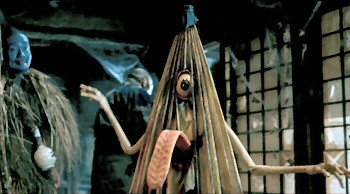