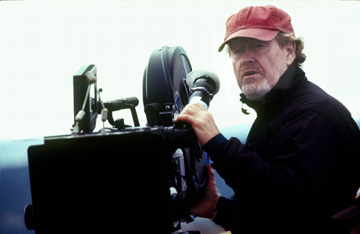 Jim Moran and me developed an editorial policy at 24LiesASecond that restricts our contributors to write about films they appreciate. The concept behind it being: Why waste words on what you think stinks, when there’s plenty out there to love? It’s a policy that I’ve really taken to heart and intend to stick to on Lost in Negative Space.

But alas, not for now…

You see, this is an emergency. Someone really needs to I feel the need to warn you that – in spite of the pats on the back the suits nice gentlemen at Fox might be giving you at the moment – for a director of your considerable stature, churning out turds like your latest film A Good Year (2006) is nothing less than a fucking disgrace strikes me as something of a disappointment.

It’s not that I don’t admire your work. Alien and Blade Runner are masterpieces of genre cinema that I value deeply, and despite its narrative problems on a purely visual level, I consider the director’s cut of Legend to be one of the most mesmerizing fantasy features ever directed. I realize it’s hard to sustain such a high level of brilliance throughout an entire oeuvre, but not even GI fucking Jane little could have prepared me for the crap I had to endure what I was to behold at the Cinema Expo in Amsterdam last week.

Here’s the thing. About a quarter of an hour into A Good Year, I realized to my great shock that I was looking at an attempt at comedy… and not a very succesful one at that. Trust me, Sir, leading man Russel Crowe is many things, but droll isn’t one of them. What’s more: I couldn’t escape the impression that I was witnessing the product of an old man a filmmaker with nothing left to prove much to say or show. Let me put it this way: In case you’re looking for a few blurbs to polish up the newspaper ads, my suggestions would be either ‘NUMBINGLY BORING,’ ‘UTTERLY PREDICTABLE,’ or ‘MADDENINGLY MORALISTIC.’

Yes, I’m sure the wine and the cigars tasted good around the sun-soaked vineyards of that wonderful French estate where most of your shoot took place. And no, I certainly have no complaints about A Good Year‘s lush cinematography, although you’d have to be a moron to fuck up a shot in the Provence. But I came in expecting to see a film by Ridley Scott, the visual stylist… not to watch his freaking holiday snapshots!

‘Everything matures… eventually’ seems to be the tagline that the copywriters at Fox made up to promote your film in days to come. The real question, I suppose, is how you choose to mature.

Yours truly,
A worried admirer