Believe it or not, but these days my stats are higher than they ever were. I’m not sure what that means, because it’s been quite a while since I posted anything. Maybe it’s because all of you keep checking to see if I’ve kicked off the new weekly webcomic yet. If that’s the case: Don’t lose faith! DIRECTORAMA is slowly but surely taking shape…

In fact, I’ve already made it through the hardest part. Before the actual drawing could begin, I needed to settle on a specific format that I’d be happy to stick to for quite some time. Right from the beginning, I aimed for a stable, accessible framework that would leave plenty of room for experiment. With this in mind, there were some big decisions to make regarding the overall style of the comic (slightly more wacky than the Negative Space cartoons–the characters will have four fingers instead of five) and the amount of panels (each episode will have the look of a Sunday newspaper comic, consisting of two horizontal strips). What’s more: Since this isn’t my day job, I needed to find ways to simplify my cartooning process.

The past few weeks, I’ve read through a lot of interviews with dead and living directors (yes, that’s a hint), I’ve studied their faces and made numerous sketches. I’ve also scripted about 11 episodes. So far, Iâ€™m absolutely delighted by the direction this project is taking me. My plan is to start publishing as soon as I’ve finished three pages.

So by all means, keep watching this space!

And oh yes, before I forget: I haven’t said goodbye to the Negative Space cartoons just yet. I’ve already made a promise to Matt Zoller Seitz that I’ll devote one to his upcoming Close-Up Blog-a-Thon.

This may or may not be the last Negative Space cartoon, at least for a while. I’m going to try and focus on a new film-related project: the webcomic DIRECTORAMA. (See my previous post.)

Yes, I’ll admit it: it’s been quiet around here lately. During my vacation in Denmark I’ve been online sporadically, and ever since I came back (a little over a week ago) I’ve been taking it easy. Apparently, I needed the rest…

Meanwhile, the comment section of Negative Space #26 stimulated some great responses on the subject of movie cliches. Like many of you, I have a real love/hate relationship with these. Night scenes bathed in blue “moonlight” irritate the hell out of me, but I always perversely enjoy a cheesy line of dialogue like: â€œItâ€™s quiet here. Almostâ€¦ too quiet.â€ And the inevitable shriek of feedback whenever a timid character grabs a stage microphone always puts a big smile on my face.

Some of these cliches just feel so â€œrightâ€ that it almost feels unnatural when they donâ€™t occur in real life. I once shot a scene where someone before the camera had to flip a coin, and I made a big deal out of it that the sound man had to properly record the metal â€œping.â€ Everyone on the set knew what I was talking about and we collectively held our breath during the first take. Of course, there was no â€œping.â€ Go ahead, try it at home. There’s no way you’ll hear it. It’s at moments like these that you realize weâ€™re more conditioned by the movies than weâ€™d like to admit.

Well, there’ll be a new Negative Space cartoon up real soon, but that’s not all… I’m preparing a brand new online project that will (hopefully) dominate most of my blogging time in the months to come. Perhaps some of you regular readers will remember Andy Horbal urging me on this site to dig deeper into the fertile ground of drawn criticism. Believe it or not, but the recent passing away of Bergman and Antonioni inspired me to give it a try…

Picture it: A weekly multi-panel comic strip, no less, by the name of DIRECTORAMA. I don’t want to give away too much just yet, but expect me to take the idea of graphic film criticism to the next level, albeit in very unexpected ways. That is, if I can make this thing work at all. It may very well mean the start of a whole new Web site besides this one (along the lines of what you find on Webcomics Nation). Watch this space to be the first to know.

Good idea? Bad idea? Let me know what you think! 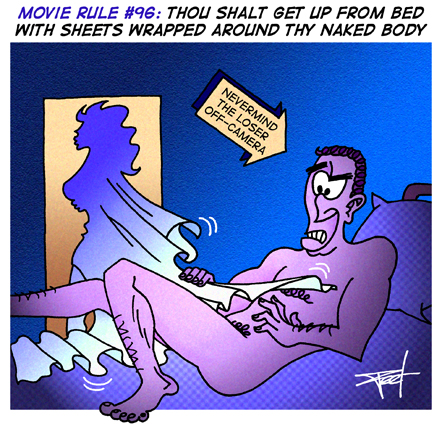 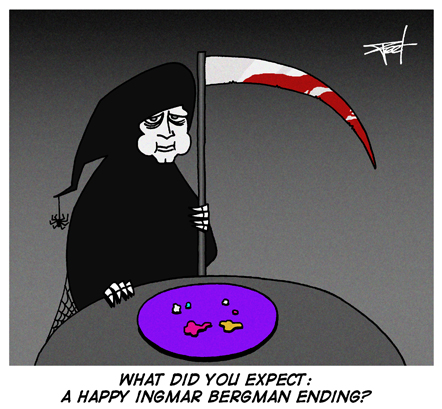 Greedy bastard, that Grim Reaper. As if the Swedish master wasn’t enough, he had to take Antonioni on the same day. If there’d be some pie left, I’d throw it in his pale face… 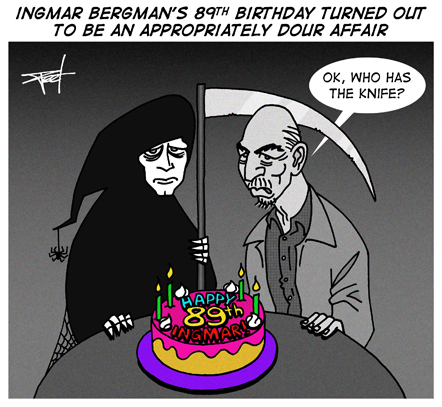 Just heard the news today that Ingmar Bergman has passed away.
IÂ´m speechless…

When I was in the process of coloring this cartoon (yeah, it didnÂ´t take too long this time around), I wrote an email to a friend that jokingly referred to BergmanÂ´s impressive age: “I just hope I can finish this bloody cartoon on time,” were my exact words. Honestly though, who could see this coming? Bergman was one of cinemaÂ´s greats and he’d been around for so long that I was starting to believe he would never leave us. (In fact, IÂ´d already planned a second cartoon for next year. It wouldÂ´ve had exactly the same setting, only the Grim Reaper would groan: “Good grief, not pie again…”)

I promise IÂ´ll come up with an appropriate follow-up post soon. Just have a little patience, because IÂ´m currently on vacation in Denmark and I’m not sure when (or if) I’ll be able to upload something from my laptop.