Directorama is also the name of a weekly webcomic that ran from October 15th 2007 to June 28th 2009. Written and drawn by Peet Gelderblom, it chronicles the afterlife of a pantheon of legendary directors duking it out for artistic supremacy. Their heavenly mission: To inspire filmmakers carrying the torch back on Earth. The strip itself was inspired by the near simultaneous deaths of cinematic masters Ingmar Bergman and Michelangelo Antonioni in the Summer of 2007. New episodes of Directorama were published every Monday, at this very website, as well as The House Next Door and the Brazilian website Cinema em Cena (in Portuguese). The first 30 episodes also appeared in Smallformat magazine.

Sergio Leone and the Infield Fly Rule has described Directorama as “a new brand of film criticism in a Sunday-funnies format that suggests an ongoing conversation with styles and stylists as far-ranging as Doonesbury, Sergio Aragones, Bill Watterson, Fractured Fairy Tales, Neil Gaiman and, of course, Cahiers du Cinema.” 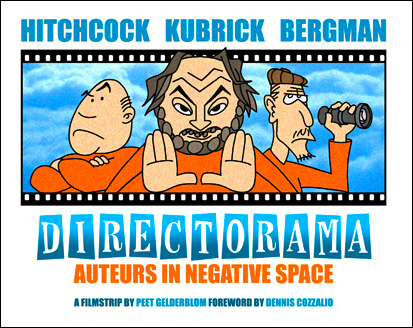 “Doonesbury for cineastes… Witty and even political… Film lovers no longer have to die before going to movie heaven; Peet Gelderblom brings it to us, with Directorama.”
— DON MANCINI | Child’s Play, Seed of Chucky, Hannibal

“We all know that deceased auteurs have achieved immortality in their movies, but now they have an off-screen place to hang out as well. It’s called Directorama and only somebody as talented, knowledgeable and infatuated with movies as Peet Gelderblom (who knows his Ozu from his Antonioni) could have conceived and realized such a place. To paraphrase the Righteous Brothers: If there’s a cinema heaven, well you know they’ve got a hell of a credit arbitration process.”
— JIM EMERSON |  Scanners, RogerEbert.com

“Critics who are struggling to fit a film’s core issues in 800 words, take notice! Peet is able to capture filmmaker’s essences in a few word balloons, while still being funny and illuminating.”
— PABLO VILLAÇA | Cinema em Cena

“That movie-mad medium Peet Gelderblom has been to the Great Beyond and lived to tell about it. If you’ve ever wondered about the big mysteries of life (i.e.: What does Andrei Tarkovsky think of The Bourne Ultimatum?; Would I like Ingmar Bergman when he’s angry?), look no further than Directorama, the Antonioni-esque urtext of cinephilia, a Kubrickian head-trip beyond the widescreen veil.”
— KEITH UHLICH |  The House Next Door, Time Out New York

“One of Peet’s singular achievements with the series is that he has found a voice within the comic strip medium that invites serious consideration of cinematic issues as well as imaginative flights uncommon to more conventionally grounded criticism.”
— DENNIS COZZALIO |  Sergio Leone and The Infield Fly Rule

“This is movie satire of the highest order… Peet’s angular and stylized characters perfectly capture the figures that he’s parodying, probably the best work of that kind that I’ve seen this side of Kate Beaton or the earlier Dave Sim caricatures.”
— MICHAEL PETERSEN | Patchwork Earth