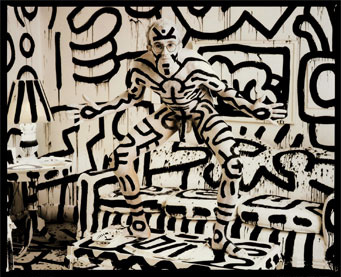 I’m not an unconditional admirer of Annie Leibowitz‘s high-concept photography (A portrait of the Blues Brothers? Oh, I know: Let’s paint their faces blue… Genius!) and I’m not as crazy about Keith Haring as I used to be. But Leibowitz’s portrait of a body-painted Haring is without a doubt sublime.

At home I have a framed poster of that photograph. It’s on the wall of our lavatory, where it frequently startles unsuspecting guests. The picture is printed in full-color – despite the additional costs that such a decision entails – just so you can barely make out Haring’s pink skin underneath the black-and-white paint camouflaging his body.

Annie did Keith quite a favor with that portrait. With just one click of her camera, she helped a fellow artist reach the highest obtainable. In that fraction of a second, Keith Haring became one with his art.

It was the gift of a lifetime. And as early as Haring may have passed away, he will rest in peace forever.