Between invisible apes strapped to operating tables and pretty Jewish girls who dye their pubic hair in extreme close-up, the choice is easy… Welcome home, Paul Verhoeven! Zwartboek, Verhoeven’s first Dutch film in over twenty years (if you include 1985’s Euro-pudding Flesh & Blood), is the work of a director doing exactly what he wants, and nothing else. So it’s good, then? Oh yes. I’d go so far to say it’s Verhoeven’s best. 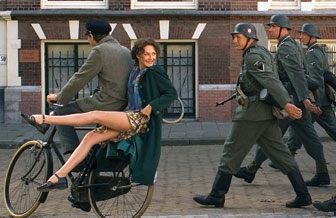 Paul Verhoeven has never been afraid of the Big Gesture. It’s what he’s all about. Zwartboek is no exception. In a recent interview, actor Thom Hoffman (who starred in De Vierde Man as well as Zwartboek) compared Verhoeven to the abstract expressionist painter Karel Appel, known for his motto “I paint like a barbarian in these barbarian times.” The comparison makes sense. Verhoeven’s style is the cinematic equivalent of CoBrA action painting: exploding with robust imagery, primary color schemes and violent brushwork. But don’t be fooled–this Dutch Master’s broad strokes often work together to paint a finely nuanced picture. Behind Zwartboek‘s brawny sense of adventure is a cautiously calibrated morality play.

Not that it should come as a complete surprise. In the case of Zwartboek, Verhoeven and regular screenwrite Gerard Soeteman (Turks Fruit, Soldaat van Oranje, De Vierde Man) took twenty years to do their homework and refine their script until it snapped, crackled and popped, referencing a rough total of 800 documents, articles and books on the Dutch resistance. They based their film on real events and concocted a fictional storyline to glue those facts together.

Thematically, the film is rooted in Verhoeven’s experiences of growing up during WWII. Back then, the parents of one of his best buddies were members of the NSB – a Nationalist party that sympathized with the Nazis – convincing him that there were endless shades of grey between black and white. Verhoeven set out to make a picture in which no single character is purely innocent or strictly evil (although I believe he permitted himself one or two out-and-out villains). This in itself is not a radical philosophy – especially not in these trivial times – but it’s a truthful one. Zwartboek leaves you with the impression that the Liberation never came, that human atrocity lives on forever and people are not to be trusted… But hell, life’s sure worth the ride! 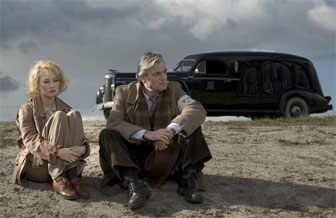 All people behind the scenes worked miracles to make 17 million euros look like 70 million dollars. They had a hard time to raise money for this picture in Europe, but on the bright side Verhoeven gained access to an unbelievable pool of available acting talent. The lovely Carice van Houten as Rachel/Ellis, especially, is radiant in her leading role and Verhoeven quite rightly calls her the most talented actress he’s ever worked with. Here’s a heroine that modern audiences need to see more of: strong, down-to-earth and witty. When this brave young woman finally breaks, you’d have to be a cold-hearted stump of a being to not break along with her.

The same quality level can be found on every level of the production. I take back my initial doubts about director of photography Carl Walter Lindenlaub (Independence Day). His crisp lighting style is a good match with Verhoeven’s larger-than-life sensitivity. Lindenlaub wisely avoided shooting in black and white, sepia-tone or using a bleach-bypass process and based Zwartboek‘s look on German color films from the 1940s instead. (Whether Lindenlaub succeeded in his approximation is not for me to judge–it’s been a while since I saw one.) Anne Dudley’s score sounds like a cross between the military marches that Rogier van Otterloo composed for Soldaat van Oranje and Jerry Goldsmith’s eerie-ethereal main theme from Basic Instinct.

Frustratingly enough, the critical reception in the Netherlands doesn’t seem to be very positive. Some things never change. It just shows how good the Dutch are in underestimating their own artists. Until they die, that is. 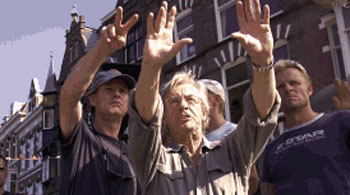 After the principal photography of Zwartboek was completed, I’ve worked with a couple of its crew members on two of my own projects (the camera dolly we used was still marked with a “Carl Walter Lindenlaub” sticker). They told me that Verhoeven prefers to shoot in sequence to keep his actors in the moment, which meant that the lighting constantly needed adjusting as soon as the director decided to switch over to a reverse angle. And the man never, ever shoots a master. It’s in his contract, simply to avoid impatient producers going: “We’ve got the scene, I just saw it. Move on!”

Now listen to this: Apparently, Sharon Stone called Verhoeven on the set of Zwartboek directly after the release of Basic Instinct 2. When she asked him if he liked it, Verhoeven exclaimed in his clunky Dutch accent: “But Sharon, you look TERRRIBLE! How could they’ve DONE this to you!” Tact was never his thing. Thank heavens for that.